The Claude Alston Award is the ECA's highest honour, given in recognition of an individual's distinguished contribution to the Edmonton construction community. The ECA Board of Directors created the award in 1975.

The award is named for Claude William Alston (1883-1975), a charter member of the Edmonton Builders Exchange (est. 1931 and renamed the Edmonton Construction Association in 1965). Alston, a General Contractor, was one of the association's greatest contributors, serving as its President from 1947 to 1949, at which time he retired from Poole Construction Limited. The following year, Alston was appointed Secretary-Manager of the Association, a position which he retained until 1960. He passed away in 1975. Shortly after he passed away, the ECA Board of Directors developed criteria for a special award in Alston's name.

The Claude Alston Award allows the ECA to celebrate and honor persons of extraordinary leadership contributing to the “common good” of the Edmonton construction sector. The ECA seeks to recognize individuals whose accomplishments, leadership, and service will inspire future leaders who espouse similar values and enable the best outcomes for the construction sector.

This award is to recognize a person in the industry who has had a substantial impact over the course of many years. The award will be presented on even numbered years, however the previous year’s nominations will be kept on file for future consideration.

Stage 1 - Letter of nomination: two sentences on why you think your nominee should be honoured with this award. Nominations are welcome at any time but must be submitted to wendy.billey@edmca.com no later than August 31st to allow full consideration by the Awards and Recognition Committee.

Stage 2 - If shortlisted, the Awards and Recognition Committee may request more details, such as:

The Awards and Recognition Committee is comprised of six people from the following categories: 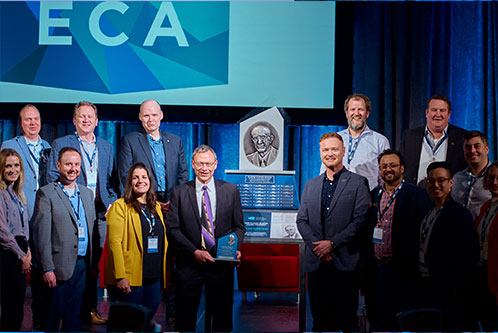 Over the past 40 years, Alan has been an integral part of the construction industry in Alberta and beyond. His diverse career includes participation as a tradesman, project manager, executive, and as an industry board member.

Working alongside his father on projects in his early years instilled a passion for construction and the value of doing things right the first time. It was also the start of a lifelong commitment to teaching and mentoring others to help them excel in their construction careers.

Shortly after earning a Civil Engineering Technology diploma from SAIT, Alan joined the PCL family of companies as a labourer. Within his first six years, he earned his Red Seal Carpenter designation and amassed a wide breadth of field experience. He drew on this experience as he moved from the field to the office and began working on bids an as estimator. As the years went by, he moved into project management and led significant and unique projects in Calgary and southern Alberta.

In 2004, Alan welcomed the opportunity to lead the PCL Edmonton Buildings operations team as work in the region expanded and the size and scope of projects became larger and more complex in scope and contracting methods. In 2008, Alan was promoted to vice president and district manager and provided overall leadership for the region. The highlights during this time included fostering a high-performance team and seeing people grow in their careers as they delivered some of Edmonton’s most iconic projects.

To support industry growth, Alan held board positions with the Edmonton, Alberta, and Canadian Construction Association boards and held the role of ECA chair for two terms.

Alan’s tradesman roots made him deeply aware of the need for continued learning in the field and support for trade worker families. Through board involvement with Merit Contractors Association and the Merit Benefit Trust, Alan was able to provide leadership and strategy to many initiatives that benefitted workers, their families, and the industry as a whole.

As a construction leader, Alan has coached and mentored many people over the years to stimulate their personal and professional growth. 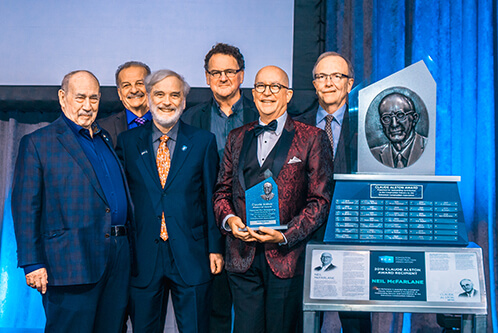 Graduating with a Civil Engineering degree from the University of Alberta, he spent the first 22 years of his career with Alberta Infrastructure, contributing to and leading interesting projects such as the Nakiska Ski Area in Kananaskis for the 1988 Calgary Winter Olympics, the Alberta Legislature Building and the Government Centre site, and development of a major fresh water marina at Cold Lake. Neil also led a team that received the Premier’s Award of Excellence for the use of Best Value Design-Build procurement leading to a successful Public/Private Sector Partnership for the development of the Alberta Research Council Facility in Calgary.

In 2009, Neil saw a need for project management consulting services to assist private and public sector Owners in selecting and implementing appropriate methods of project procurement, and started a consulting firm to service that need.

Returning to Infrastructure in 2011 as a Senior Project Manager, Neil led the new Royal Alberta Museum project and assisted in wrapping up the Federal Building Project. From March 2017 to March 2018, Neil served as Assistant Deputy Minister of Infrastructure’s Health and Government Facilities Division, leading a team of professionals delivering major projects to meet government priorities.

Until his retirement from public service in May 2019, Neil served as Executive Lead, Change and Project Management for Alberta Transportation, heading up the Operational Excellence Branch, and acted as the Primary Change Advocate for the department, as the Government of Alberta moved to a One Government approach to enterprise systems.

Neil also served as co-chair of the Owner’s Forum, along with Andrew Sharman, University of Alberta. Facilitated by the Edmonton Construction Association, Public Owners from across Alberta meet twice yearly to discuss priorities to strengthen relationships with our construction industry partners – consultants and contractors.

Neil believes strongly that teamwork, collaboration and partnering with industry stakeholders leads to better project results for all participants. 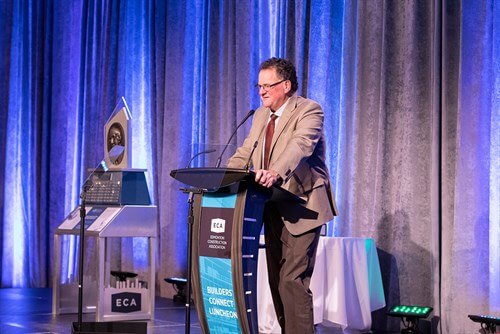 With over 40 years in the construction industry, Doug Hager is a much-respected local figure. Doug began his career with Alta West Construction, where he started as a Labourer. Over the 13-year period with Alta West, Doug moved up the ranks from Apprentice Carpenter to Superintendent. He then went on to work at Stuart Olson for the next 26 years as both a Superintendent and Field Manager. From there, Doug came to The Graham Group in 2012, where he is currently Director of Construction. In this role, he travels to all of Graham’s 14 regional offices ensuring safety, quality and execution are carried out in a consistent and professional manner.

At Graham, Doug leads by example. He is an integral part of the Graham Future Builders Program, an internal program that identifies and builds skills for high potential foremen to become Site Superintendents, continuing to “Build, Manage and Lead” Graham’s workforce to be more prepared, educated and fulfilled. Doug is passionate about the learning process and making sure that everyone gets a chance to show their potential and succeed. Graham’s Builder’s Framework learning program, of which Future Builders is a part, was recently recognized by the Construction Owners Association through the giving of their Alberta Best Practices Award.

Doug currently sits on the Board of Trustees for Mercon Benefits and is a past board member for the Merit Contractors Association. He was also one of the founding board contributors of Merit Canada. Doug’s involvement with Merit over the years was based on the principal of having a common voice for the industry. 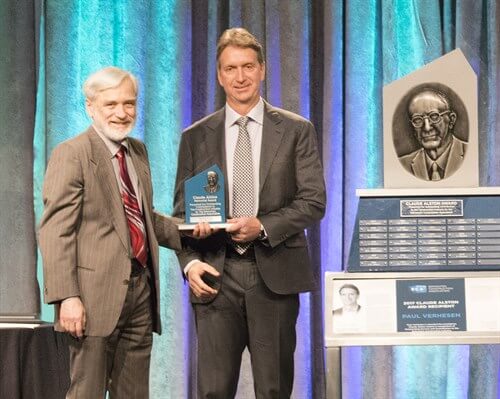 The ECA Board, Staff, and entire ECA membership offer warmest congratulations to Paul Verhesen – President & CEO if Clark Builders – and winner of the 2018 Claude Alston Award.

Paul's longstanding service to the construction industry – at local, provincial, and national levels – has been his discipline for so many years that any list of his contributions is bound to be incomplete:

Of course, Paul's 'day job' has been at the helm of Clark Builders, where his team has been singled out for nine consecutive years as one of "Canada's Best Managed Companies" and "Best Employers". We at the Edmonton Construction Association have been the direct beneficiaries of Paul's ongoing legacy of service, as he has encouraged and supported the involvement of his key leaders in many ECA initiatives, especially the YBG.

From your entire industry family, Paul – "Thank You" and "Congratulations!" 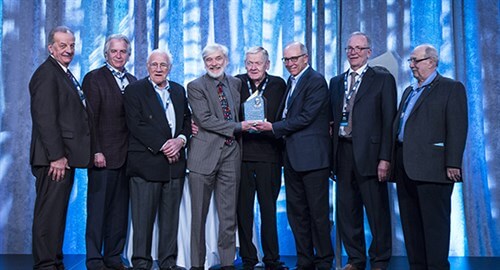 Tom is very active in the Edmonton community and participates on numerous Boards and advisory committees throughout the city. As well, The Fath Group owns and operates the FC Edmonton professional soccer team (NASL).

In 2015, Tom was awarded Start-Up Canada's Senior Entrepreneur of the Year for the Prairie region and then the National Award for all of Canada. In 2011, Tom was awarded the Ernst & Young Entrepreneur of the Year Award for Construction in the Prairie Region. After years of work the Fath Group, in cooperation with Parkland County, saved a large section of eco sensitive land as Environmental Reserve and was awarded an ARHCA Environmental Award.

Tom continues to support community initiatives by contributing at the local, national, and international levels in a wide range of areas including: sports development, cultural and environmental initiatives, as well as health and well-being of children, youth, and adults.

Tom bridged the gap between the ECA Board of Directors and road builders across the city. His familiarity and passion for the road building industry and his extensive infrastructure made him a valuable contributor to the ECA, and helped us enhance relationships with all road builders. The ECA was privileged to have Tom serve as a member on the Board of Directors from 2006 to 2009.

Thank you, Tom, for your contributions to the Edmonton construction industry. 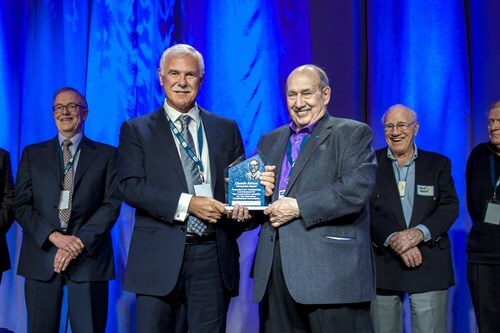 Peter Dawson was born in the UK in 1948, but at the age of 3 he moved with his family to Australia, where he spent his remaining childhood years.  In the late 1960s, Peter obtained his degree in Civil Engineering with Honors from Monash University in Melbourne.  With a desire to see the world, Peter left Australia a few years after his graduation, first travelling to South Africa and then to London, working various jobs in the construction industry along the way.   In 1974, after seeing a Syncrude advertisement in the local paper, Peter took another leap of faith as he made the move to Fort McMurray, where he initially worked as a field engineer, before moving to an office position in Edmonton, where he worked until 1979.

Since 1987, the business partnership of Peter and Wayne, and the company have flourished.  Since opening its doors, Dawson Wallace Construction has grown into a company of some 150 employees, with offices in Edmonton, Lethbridge and Calgary, and $300 million in annual sales.  In 2017, the company will celebrate its 30th anniversary.

Throughout the years, Peter has been highly involved in the community and a strong supporter of our industry.  Peter was elected to the ECA Board of Directors in 1991 and became President of the Board in 2001.  At that time he stated of Dawson Wallace’s success:  “the key to our success has been having good people, both at the office and in the field.”

As a Past President, Peter has remained active at the ECA, and can be seen at major ECA events throughout the year.  In particular, Peter enjoys the ECA’s traditional Glendale Golf Tournament, where he and Wayne (and their children!) have won several competition prizes over the years.

Peter remains active in the community, at the ECA, and in business.  His two children, Sharon and Jeff have now joined him there, solidifying a bright future for Dawson Wallace Construction. 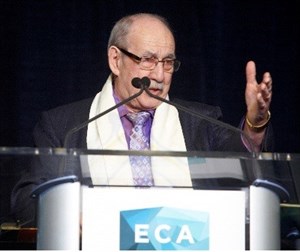 In early February, the Claude Alston Award, given in recognition of outstanding service and contribution to the Edmonton construction industry, was presented to Gino Ferri of Read Jones Christoffersen. Congratulations Gino!